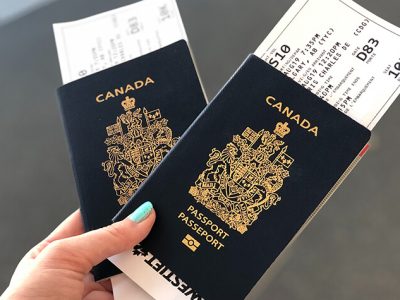 It may be convenient to have several passports, but there may be difficulties too. For instance, you can lose your previous citizenship or become liable for military service. These rules vary by country.

According to Statistics Canada, about 945 thousand people (3% of the total population) had multiple citizenships in 2011. Almost 80% of them were immigrants. Among naturalized citizens, 14% had non-Canadian citizenship, most often of the UK, USA, and Poland.

You have dual or multiple citizenships if more than one country recognizes you as a citizen.

Canada allows dual or multiple citizenships in addition to the Canadian one and does not force anyone to renounce their first citizenship to obtain a Canadian passport. Canadians can lose citizenship only if they voluntarily renounce it in the course of a complex procedure.

It is important to know that persons with dual citizenship (one of which is Canadian) can take transit or travel through Canada only with a Canadian passport. If the second country of citizenship requires you to show the passport of that country upon departure, bring both documents with you.

However, if you are a citizen of both the United States and Canada with a valid American passport, you do not need a Canadian passport to enter Canada.

Some countries recognize dual citizenship, others do not. For example, a German citizen who has obtained Canadian citizenship will be recognized in Germany as a citizen of both countries. The same is true in most other European countries, as well as in Australia, the USA, and some others.

However, some countries recognize only one citizenship and may force to renounce all others.

In Iran, people with dual citizenship may have their passports confiscated, may be prohibited from leaving Iran, or other problems may arise with the Iranian authorities. A similar situation exists in Libya: local authorities can seize passports of Canadians of Libyan descent, interrogate those citizens, and prevent them from leaving the country.

In some countries where second citizenship is not recognized, you may be liable for military service, even if you have a Canadian passport.

An Egyptian citizen may also be liable for military service. To obtain an exemption from military duties, it is required to provide many documents before leaving Egypt, including a document of discharge due to dual citizenship. This document does not necessarily exempt from the service, and it may take a long time to get it. The Canadian government does not influence this process since the decision on military service is up to the Egyptian government.

A male Iranian citizen between the ages of 18 and 34 is required to serve in the army if he has not been exempted from military service. This requirement also applies to persons with Iranian and Canadian citizenship — even those born in Canada. People with dual citizenship at the age of 17 years and older are prohibited from leaving Iran without military service.

A Taiwanese citizen between the ages of 18 and 45 can be subject to military services if he has a Taiwanese passport or was born in Taiwan. Before traveling to this area, it is important to contact the Taiwan Economic and Cultural Office in Ottawa. Dual citizens who visit Taiwan with a Canadian passport may also be required to do military service.

To avoid being called up for military service, persons with dual citizenship can come to the country of first citizenship with a Canadian passport. However, it may not help in some countries, and if there is a visa regime between Canada and the second country of your citizenship, you will have to disclose information about all your citizenships in the visa application form.

The obligation to pay taxes does not depend on citizenship but on tax residency. As a rule, a person becomes a tax resident of a country if he spends there more than 183 days a year, and is obliged to pay taxes on income received in this country and abroad, in accordance with the country’s tax legislation.

This does not mean that residents of several countries pay taxes in all these countries. Canada has double tax treaties with many states. Residents of these countries file tax returns in both countries but pay taxes only in one of them: the amount of tax in one country is deducted from the tax amount in the other.

Depending on the country, there may be other nuances associated with dual citizenship.

For example, in China, a Canadian child with at least one parent who is a citizen of China can be considered a citizen of China. Chinese authorities may not recognize the child’s Canadian citizenship, and family planning rules may apply to their families. A similar situation exists in Hong Kong, where Canadians born in Hong Kong must declare their Canadian citizenship at the Hong Kong Immigration Department — otherwise, they will be recognized as Chinese citizens.

In Costa Rica, people who are born in this country and have Canadian citizenship are recognized as Costa Rica citizens until they are 18 years old, even if they travel with a Canadian passport.

In the UAE, authorities determine citizenship based on the passport that you use to enter the country. Make sure that you use the same passport to enter and exit the UAE. If you show documents from different countries, you may be detained.

Before leaving for Canada and obtaining Canadian citizenship, it is recommended to study the laws of your country of first citizenship. For more information, contact the country’s Ministry of the Interior or the consulate.