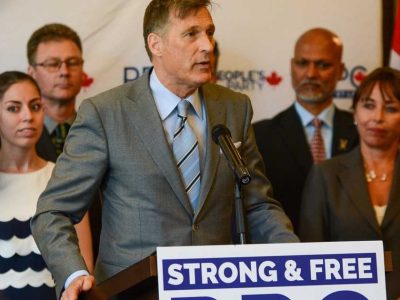 Maxime Bernier, the leader of the People’s Party of Canada (PPC) represented in the House of Commons, has recently proposed building a fence along the border between Canada and the United States.

Speaking in Mississauga, one of the most multicultural cities in Canada, Bernier has also promised to halve the number of immigrants who come to the country every year. If he becomes prime minister in the upcoming October elections, this figure will be reduced from 350,000 to 100,000.

In his speech, Bernier also said that if he were elected, his party would abolish the law on multiculturalism and would no longer allocate funding to encourage multiculturalism in the country.

Bernier quoted a book written by Salim Mansur, a member of the PPC. Mansur described multiculturalism as “a lie based on the idea that all cultures are equal. A lie destructive of our Western liberal democratic heritage, traditions, and values based on individual rights and freedoms.”

When Bernier was asked during the speech what money the fence on the border would be built on, Bernier replied that he was not referring to a real wall, but only declared sovereignty in this way, so no funds would be required.

To the remark that this is a racist policy, Bernier said: “I don’t care one bit about people’s race or skin colour. I have said many times that racists and bigots are not welcome in our party.”

Maxime Bernier has been a member of parliament for Beauce, Quebec since 2006, having won four consecutive elections. Before he formed the People’s Party of Canada, Bernier was a member of the Conservative Party. He ran for party leadership but lost to his opponent, the current Conservative leader Andrew Scheer.

Currently, the People’s Party of Canada has only 3% of the vote, followed by the Bloc Quebecois.